What's going on with Thomas

I am tossing around the idea of making Thomas a lead character in his own work. He didn't play a very significant role in "Not Forgotten" after all and he is a young psychic with a bright and exciting future on the horizon. Yes, the more I consider it, the more I think he needs to have his own voice but in what genre? Psychological Thriller? Paranormal Romance? This is going to be fun.
Posted by bonnietaylorauthor at 12:50 PM No comments:

Are you an avid reader who is willing to write a short review of my book? Do you enjoy paranormal fiction? If so, I would love to offer you a free digital copy of "Not Forgotten" in return for your promise to post your review. Please leave me a comment to express your interest and I will forward you the details!
Posted by bonnietaylorauthor at 8:07 AM No comments:

What can be said about Jimmy Redbush? He is a man who is completely grounded in the belief that without a connection to the spiritual realm, happiness on the earthly plane is not possible. He is the keeper of great wisdom acquired from his culture and others around the world. He spent his lifetime acquiring this knowledge and uses it to aid and educate those who ask for his help. We will talk more about him later.
Posted by bonnietaylorauthor at 8:25 AM No comments:

You can now purchase the e-book on Smashwords, Amazon - Kindle Store, and Barnes and Noble Nook! Check it out!
Posted by bonnietaylorauthor at 8:19 AM No comments:

John Roberts is the father who tries desperately to hold things together. He works a lot and at odd hours in an effort to distance himself emotionally from his children though he loves them with all his heart. It's very difficult for him to face the pain that they have suffered through the loss of their mother and he believes that providing them with a good income and a stable can somehow make up for his inability to connect on an emotional level. With the death of his son Tony, he falls further into his program of denial and never really mourns his loss.

The events that unfold when Redbush and the paranormal research team join the case are exactly what he needs to give himself permission of feel again.
Posted by bonnietaylorauthor at 12:15 PM No comments:

Lilly is a fairly disconnected teenager and tries to have it appear as though her isolation is by choice but it's more appropriate to say that she is the victim of the unfortunate circumstances in her life thus far. As she tells us when she is thinking about attending Karyn's birthday party, she had play dates when her mother was alive but after her death, these organized social events stopped and she became her older brothers tag-along. His death, of course, would have left her very much alone if Kyle hadn't haphazardly stumbled back into her life.

Though driven to help her brother, she is reluctant to claim her psychic abilities for fear that they may cause her to be further isolated. Her coming to grips with the reality of her gift is her true coming of age.
Posted by bonnietaylorauthor at 12:30 PM No comments:

"Not Forgotten" the e-book edition has launched

I'm proud to say that the digital editions of my book, "Not Forgotten" are now available for purchase on Amazon for Kindle and in all other digital formats through Smashwords.com. 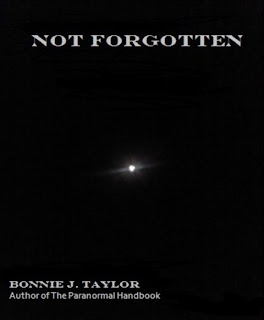 Posted by bonnietaylorauthor at 12:11 PM No comments: