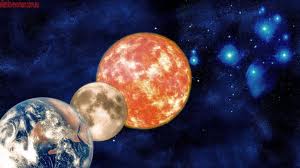 When I first heard about the Mayan prophecies for this year I admit, I laughed it off. I thought, sure, more Y2K rhetoric only with an ancient rather than technological face. I laughed because it just seemed so silly. More doomsday naysayers trying to evoke fear reactions in the masses. Then, this month, I began to notice the unusual astronomical events that seem to be taking place and started doing some research.

My first concern was the lengthy duration with which the moon has not been visible from my vantage point. My kids are avid moon watchers, even the two year old, and I haven't been able to show her the moon in weeks. Since the full moon in fact. When I looked in to it I discovered that this was a supermoon year - a year when the moon's perigee (The point at which the moon is closest to Earth) coincided with the full moon on May 5th. They say we are lucky that the moons perigee didn't coincide with the Earths closest approach to the sun which last occurred January 3, 1912 and reportedly caused the sinking of the Titanic due to the tidal response to the planetary alignment.

So, supermoon? That would lead one to believe that the moon would be more visible during the new moon when it generally disappears from the visible sky, right? No. While the moon was waning, the sun was experiencing its own transition to alignment for the solar eclipse on May 20. At this time, the Earth, moon, and sun are in perfect alignment with Pleiades, the center of the galaxy. Since the light from the sun is hitting the moon on the side that is not visible from Earth, we still can't see the moon. This event is also responsible for the appearance of the solar ring of fire on the pacific coast on May 20th. It has been 2600 years since this alignment last occurred.

This is all very interesting but what does it have to do with Mayans? Simple, the Mayan long count calendar accurately predicted these astrological events. The fact that a calendar created in pre-Columbian Mesoamercia has a remarkable astronomical relevance in 2012 has astounded me. This same calendar appears to have accurately predicted the tsunami's and hurricanes that plagued the planet in the period between 2004 and 2006.

So, the Mayan long count calendar has an end date of December 21, 2012. Some believe that this date represents the beginning of an apocalypse, the end of mankind. Others, believe it will mark the beginning of the Golden Age of man, a time when humans will embark on a positive transformation. Still others believe the calendar is inaccurate and that revisions have been found among the relics recovered from the ancient Mayan cities. For me, I find it difficult to believe that nothing will happen on that day since this calendar has been so on point thus far. I will simply hope that the New Anger's are right and that mankind will transform for the good because we sure do need a wake up call.
Posted by bonnietaylorauthor at 9:23 AM