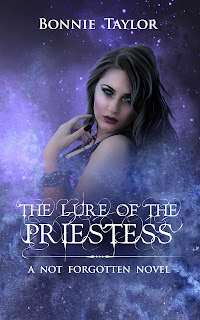 As Jimmy drifted to sleep, he heard the faint cry of a lone wolf in the distance. He could feel the cool night air on his naked chest and saw the shadows of the trees cascading along the path created by the round, red, moon. He took a few steps out into the darkness, then, found his feet moving faster. He crouched as he ran and soon, the change began. The wind whipped through his fur causing it to stand on end as he gained more speed. He was galloping toward the clearing; a majestic white wolf. It was an incarnation that he had never experienced outside of the dream world. He never had the desire to shift into wolf form. He was the son of coyote.

In the clearing, spotlighted by the moon glow, was the she-wolf. Adorned in black silken fur with her haunting blue eyes. She was larger than him because, in this form, she was stronger. She sat with a regal grace befitting the High Priestess of the Forest.

He was confounded as he gazed upon her. She was so many things to him. She was the evil creature who used forbidden magic to transform herself and ravage the old world witches. She was his mentor and friend since childhood whom he loved with all of his heart, and she was a longing. She was a primal craving rooted deeply in his walker spirit and he wanted her.

He approached her slowly. She sniffed the air around him and stood. When they were nose to nose, she licked his face, then rubbed her thickly manned neck against his. He saw stars that burst into cosmic light as his blood rushed through him and as they embraced, they lost their animal incarnations and were kneeling together, naked, on the cool grass.

She touched his chest sending a shiver straight to his soul and he gasped. She smiled, leaning in closer to press her lips against his. His head was swimming and though he tried to push a conscious thought to the forefront. A warning, a memory, a glimpse of the terrible life he would live if he chose her, he was entranced by her. She whispered in his ear. The words were inaudible, but the act prevented him from summoning a clear thought of his own.

The fight was leaving him and he was hers for the taking. Seduced by the whispered incantations of the ant’ jihnii but though his body had surrendered his strength, his mind kept reaching for something, any thought that might break the spell. As he reached the bounds of desperation, a face appeared in his mind. It was Jessie. Her flowing red hair and childlike smile, but mostly, her eyes. The way they seemed to be looking inside him without a hint of judgment. The way she made him feel like he shouldn’t be ashamed of what he was. The eyes that told him that he had a future in the world of men, even though he wasn’t entirely one of them.

He clutched Katherine by the arms and shook her. In human form, he outweighed her by close to one hundred pounds and could easily subdue her. He flashed her a look of hatred and transformed into the coyote. Coyote was fast and sly and would run without looking back.

He was in the tree line when he heard her. She cried, “How long will you deny what you know in your heart? You belong with me and I will have you.”

He awoke and wiped the sweat from his brow. Each night it became harder to block Katherine from his dreams. She was breaking him down with every visitation and he wasn’t sure if he could stay strong. He got up from his bed and walked to the window. Peering out, he saw the two birds resting in a nearby tree. They were taking great joy in seeing him restless and would surely report back that her tactics were working. She would never stop.

He needed help. In the morning, he would talk to his uncle. Uncle knew that the witch was pursuing him, but he didn’t know about the dreams. He didn’t know that she was winning. Perhaps together they could come up with a plan to, at least, get her out of his head.

Posted by bonnietaylorauthor at 8:04 PM